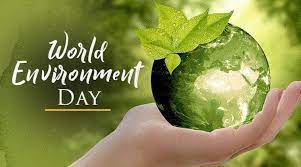 5th June 2021 marks World Environment Day, with this year’s theme being “ecosystem restoration”. Australians are very much aware of the debates about climate change and its harmful effects, with polling indicating that 79% of people are concerned about climate change, and school children across the country recently taking part in the School Strike 4 Climate.

Concern about climate change lies at the heart of the Engadine Uniting Church’s social justice mission, and our congregation has been involved individually and collectively in raising awareness and demonstrating practical ways in which we can all take part in the effort to reverse the damage we have done to our planet. In addition to our longstanding involvement with Uniting Earth, we have taken action to put pressure on law and policy makers to put a halt to actions that continue to harm our ecosystem and to hold to account those who continue to do damage.

Recently Loraine Holley from our congregation was interviewed on the Life Matters on ABC’s Radio National about the work that she, five other congregants from Engadine Uniting Church and numerous others around the country have done to raise awareness about climate change. Under the guidance of Common Grace they have been knitting scarves whose pattern represents the steadily rising temperatures of the past 101 years, and these scarves will be presented to members of the Australian Parliament in the week beginning 21 June 2021.

And Chair of the Engadine Uniting Church Council, Sue McKinnon and husband John have had involvement in bringing a class action which resulted in a landmark ruling by the Australian Federal Court last week. The judgement says that climate change will cause serious injury and death; the evidence of that harm was accepted by the Court and not contested by the Australian government. And, importantly, the Court ruled, for the first time ever, that the Minister has a reasonably duty not to cause harm.

“As followers of Christ, we have a duty to be stewards of creation as well as pursue justice for the vulnerable; acting on climate change does both. Working with others to raise funds and other essential support for this case has been both a privilege as simply a core duty of my faith,” said Sue.

There is clearly a huge challenge ahead of us to reverse the damage of the last 100 years, and much of this has to be done at the national and international level by governments being proactive in ensuring that we develop sustainably and cease our reliance on harmful technologies which degrade the earth. But there are actions that we can all take as individuals to do our part, to limit our consumption, reduce our emissions and to start cleaning up our planet. Go to our webpage for ideas about what we can all do to act now for environmental justice.