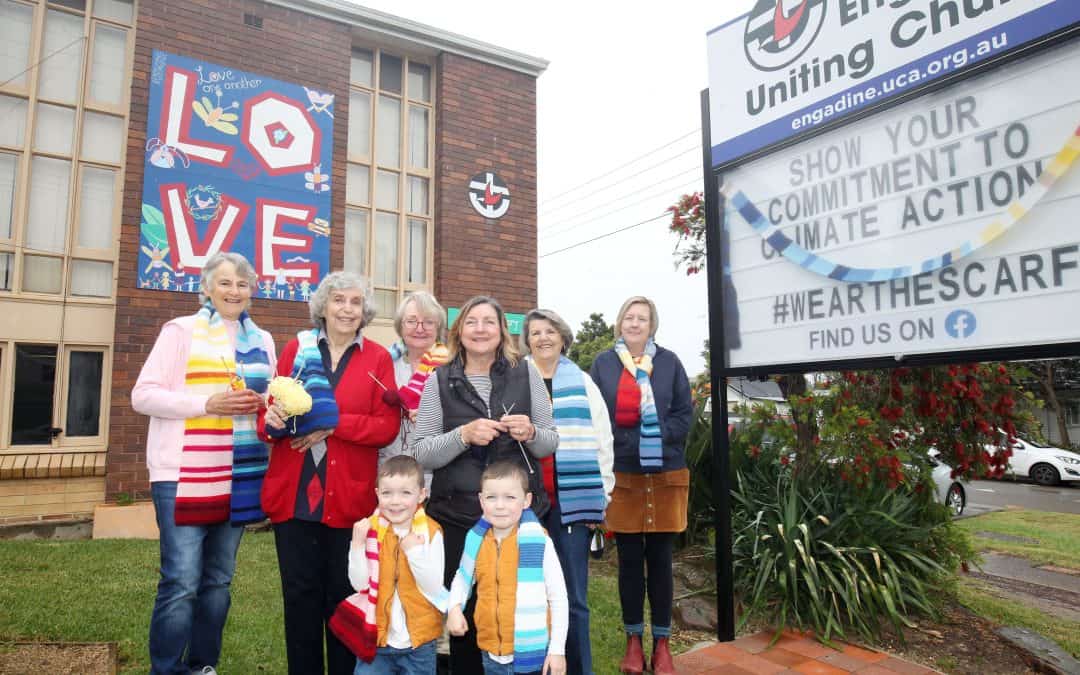 In the local newspaper again

You can read the published article online here as it appeared in the St George and Sutherland Shire Leader on 13th Oct 2021, both online and in the paper version, which was written by Murray Trembath and the lead photo was taken by Chris Lane. The following text was provided by Dr Loraine Holley to provide background for Murray.

Congregation members of the Engadine Uniting Church are working hard to raise community awareness of climate change and the need for urgent climate action by the Federal Government, in the lead-up to COP26, the 26th UN Climate Change Conference due to be held in Glasgow, Scotland in November this year.

Joining with over 300 knitters across Australia, over 10 members of the Engadine Uniting Church and Bosco Catholic Church have as part of a project initiated by Common Grace, an Australian Christian movement for justice, each knitted a ’temperature’ scarf based on 101 years of scientific data from NASA.

The average yearly global temperature was converted into one of 16 colours graduated from blues (coldest) through whites and yellows to reds (hottest) and a stipe was knitted with the appropriate colour for each year.

Currently, scarves have been individually gifted to over 40 federal politicians via face to face or zoom meetings with the remaining politicians to receive their scarf by post within the next week. These scarves are being gifted to each federal politician to wear in Parliament on Thursday 21 October, the last sitting day before the COP26.

Loraine Holley of Engadine Uniting Church said, “These scarves are a tangible expression of the deep concern people of faith have over the need for our Government to do more to counter the devastating consequences of this continual rise in global temperature. We here in the Shire are experiencing the consequence in the continual threat of more devastating bushfires each summer resulting in increasing risk of loss of life and homes”.

The knitters have requested a meeting with our two Shire Federal representatives, Prime Minister Scott Morrison and Mr Craig Kelly MP, to receive their handcrafted scarf and to hear of the concerns of their constituents. To date, Mr Kelly has not responded to the many meeting request of his local constituents and Mr Morrison has passed the meeting request to Mr Angus Taylor (Environment Minister) and his policy advisor.

“A simple gift of a climate scarf, knitted by people of faith, powerfully demonstrates to decision makers in Parliament, the ground swell of ordinary people urging our leaders to take meaningful and authentic measures that will counter future temperature increases. On the 21st October we hope to see the hauntingly beautiful locally knitted scarves being worn in our federal parliament as an expression by our politicians that they take seriously the concerns of their constituents for legitimate and authentic action on climate change.” said Dr Holley.