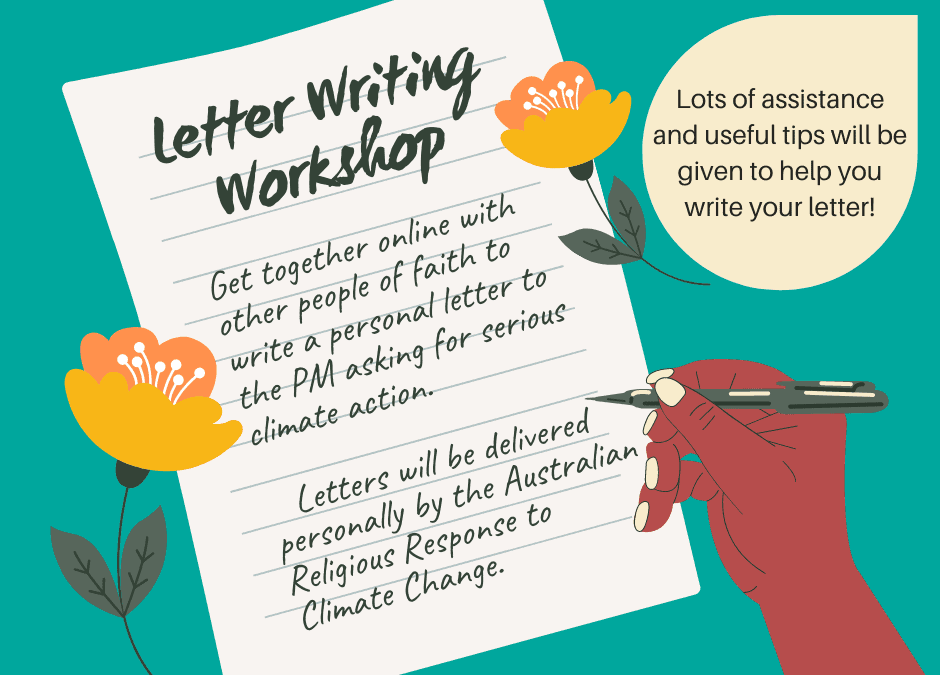 On Thursday 2nd September, a bunch of us came together online to write letters to the Prime Minister asking for serious action on climate. In doing so, we joined in with people of faith all over Australia. The letters will be presented in one large stack to the Prime Minister by the Australian Religious Response to Climate Change, who are currently wrangling with his staff to get a meeting time.

Michael gave some background and everyone had a chance to voice one of their main motivations for getting active around climate. We then discussed some of the most important things that our government could do to act fast and smart to reduce emissions, and chose one each to focus on in our letter.

Members of the St John Bosco social justice group joined with the congregation of Engadine Uniting. Not everyone could make it to the Thursday morning meeting but wrote their letters during the week and dropped them off to a central collection point. We sent them off to ARRCC to join the other letters.

Ahead of COP26 in Glasgow, the Prime Minister will hear from people of faith about the most pressing justice issue of our time. Some of them are his neighbours, right here in the Sutherland Shire!

We’ll report back to everyone about ARRCC’s presentation, and everyone who wrote a letter will let us know what response they get from the PM himself – then we’ll take the next step in this coordinated action!

You can read more about this campaign on the ARRCC website here: https://www.arrcc.org.au/letters

Update: The letters were mentioned in a number of pretty interesting places in the week after they were presented to the Prime Minister’s office. They were covered in Eternity News and Hope FM – arguably deep into the PM’s voting base and somewhere that the rest of the climate movement would find almost impossible to reach. They were also mentioned on Gold PM and Triple R in Melbourne, in Sight magazine, Mirage News and on 2SM in Sydney.